I missed last month’s challenge because of travelling so I was really looking forward to the next one. But when I read the challenge, I was not excited, honestly I did not like at all. Two reasons for this, I don’t have association with the tradition of making ginger bread houses (GBH) as many of my fellow bloggers have.After reading the challenge, I concluded that it was primarily for display purposes rather than eating and taste. I do cake decoration also but I always try to make sure that it doesnt only look fantastic but everything is edible and tasty too. I think your hard work pays off if people love what they see AND eat. 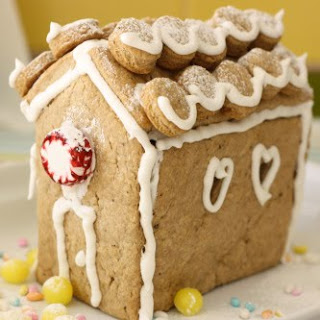 Before continuing further, first off, blog checking lines
“The December 2009 Daring Bakers’ challenge was brought to you by Anna of Very Small Anna and Y of Lemonpi. They chose to challenge Daring Bakers’ everywhere to bake and assemble a gingerbread house from scratch. They chose recipes from Good Housekeeping and from The Great Scandinavian Baking Book as the challenge recipes.” 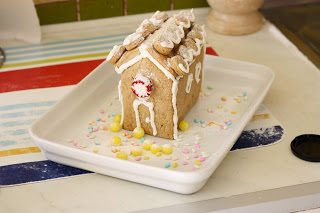 Since GBH is not a tradition for us, I chose Y’s recipe primarily because of simplicity and ingredients availability. I decided to make half quantity of it because I wanted to make a small house for the challenge without consuming lot of ingredients. As compared to my first challenge Macaroons, this turned out pretty neatly and the entire process was a breeze. I think in the end I thoroughly enjoyed constructing the house as I always wanted to be an architect. Thankyou for the challenge, I have GBH expereince under my belt.
Y’s recipe has few ingredients which are always available if you are a seasoned baker. The dough was initially dry and even after resting in fridge, it was falling apart. However, I managed to roll it out on a lightly floured surface and was able to cut out walls, roofs, front and back. Here is a small template I drew.

The cookies once baked puffed up somewhat as mentioned in the recipe too but they were also very prone to breakage and turned out very fragile. Nonetheless, stable enough to be glued with royal icing, the house is still there after 2 weeks. I now plan to throw it away, and I hate doing that. The freshly baked cookies (I made some extra walls and doors) did not taste that bad, infact my fear of using spices like cloves, ginger finally broke. I think they really makes one wonder ‘Whats that taste in the background’ 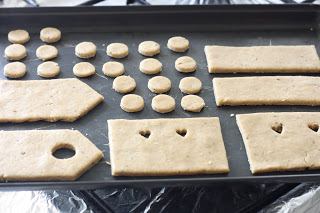 Y’s Recipe:
Scandinavian Gingerbread (Pepparkakstuga)
from The Great Scandinavian Baking Book by Beatrice Ojakangas
1 cup butter, room temperature [226g]
1 cup brown sugar, well packed [220g]
2 tablespoons cinnamon
4 teaspoons ground ginger
3 teaspoons ground cloves
2 teaspoons baking soda
½ cup boiling water
5 cups all-purpose flour [875g]
1. In a large bowl, cream the butter and sugar until blended. Add the cinnamon, ginger and cloves. Mix the baking soda with the boiling water and add to the dough along with the flour. Mix to make a stiff dough. If necessary add more water, a tablespoon at a time. Chill 2 hours or overnight.
2. Cut patterns for the house, making patterns for the roof, front walls, gabled walls, chimney and door out of cardboard.
3. Roll the dough out on a large, ungreased baking sheet and place the patterns on the dough. Mark off the various pieces with a knife, but leave the pieces in place.
4. [I rolled out the dough on a floured bench, roughly 1/8 inch thick (which allows for fact that the dough puffs a little when baked), cut required shapes and transferred these to the baking sheet. Any scraps I saved and rerolled at the end.]
5. Preheat the oven to 375’F (190’C). Bake for 12 to 15 minutes until the cookie dough feels firm. After baking, again place the pattern on top of the gingerbread and trim the shapes, cutting the edges with a straight-edged knife. Leave to cool on the baking sheet.
Royal Icing:
I used my own recipe of Royal icing which I learnt from Wilton cake decorating courses. It goes like
3tbsp meringue powder
4cups icing sugar
6 tbsp warm water
Beat all ingredients in grease-free bowl till stiff peaks are formed.
I know many of my readers back home don’t get meringue powder so you can use egg whites to make royal icing. I am quoting Y’s recipe here. I have never tried making royal icing with egg whites. 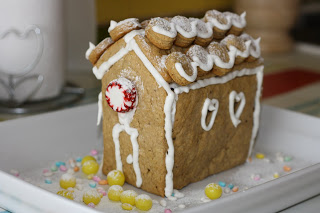 Beat all ingredients until smooth, adding the powdered sugar gradually to get the desired consistency. Pipe on pieces and allow to dry before assembling. If you aren’t using it all at once you can keep it in a small bowl, loosely covered with a damp towel for a few hours until ready to use. You may have to beat it slightly to get it an even consistency if the top sets up a bit. Piped on the house, this will set up hard over time.
Happy Holidays to all my fellow bloggers!

This site uses Akismet to reduce spam. Learn how your comment data is processed.

Hello, I’m Nadia. I am the cake decorator, blogger, a fanatic mom and a home maker, passionate about all things sweet and pretty.

Ever since I delve deep into food photography! Ca

Been Lasagna - with guaranteed to become your favo